Owners pay high price for being in business.

Local business coach, Tibor Mackor of Better Business Strategies, has found that a large percentage of local business owners are paying a high price for being in business

by having to pay their staff members more than they earn themselves.

In conjunction with Results in Business Institute (RIBI), Mr Mackor was able to conduct local and obtain the results of RIBI’s Australasian surveys and found that 63.6 per cent of business owners said they had a staff member taking home more weekly pay than them.

In addition, a high 61.3 per cent of owners responded that they felt that they did not take home a salary that justified the time and effort they put into running their business.

“The results are obviously quite concerning and reflect the enormous pressure on business owners employing staff to pay high wages, especially in a marketplace where low unemployment means it is more difficult to find and retain good staff“, said Mr Mackor. “For more than two-thirds of owners, it seems that being in business is anything but lucrative when they have employees earning more than they do.

This is despite the fact that 42.4 per cent of the owners said they had some form of tertiary qualification and 50 per cent stated they had spent money on business or personal self development and improvement courses.

In addition it was found that 56.8 per cent of respondents said they were not satisfied with or did not get a commercially acceptable return on investment.

Mr Mackor said that while he was shocked by some of the survey results, other outcomes were in line with what he, Better Business Strategies and the RIBI network found on a daily basis when consulting to the SME community.

“The results are symptomatic of the many problems facing small businesses, but it’s not until a large number of businesses are surveyed and the results collated that the big picture becomes evident. We are in a strong economy but many small business owners are not reaping the fruits of their labours when they have to factor in the high costs of just being in business, such as spiralling rents and expenses.”

A fully comprehensive report on how your business is performing under the following 9 categories:

Plus a summary report analysing all of the above in one easy to understand graphic (see example). 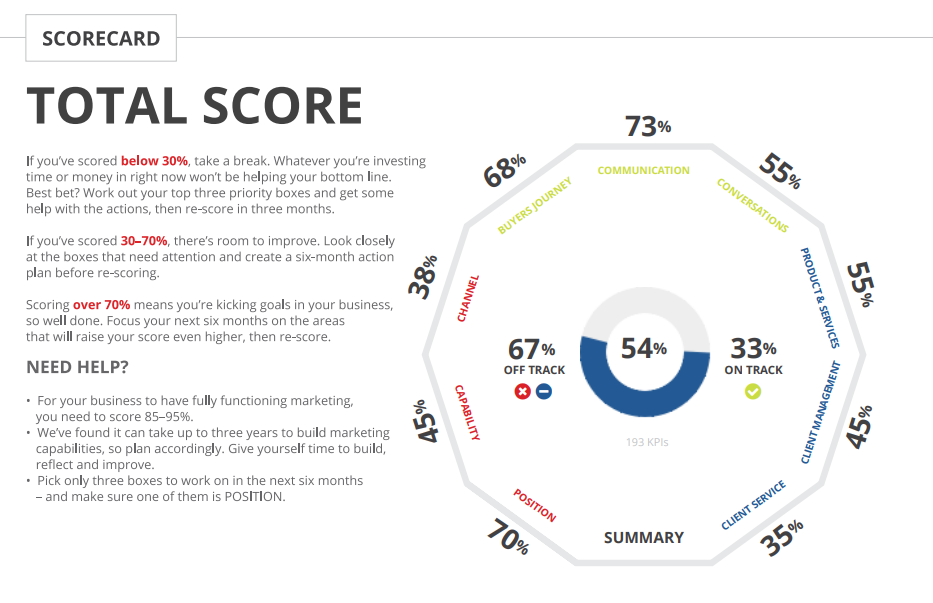 Note: Your credit card details will not be required